- There is no religion higher than Truth -

Our work is 'to study and disemminate Theosophy and serve as an active centre of Theosophical life' - with special emphasis on the body of writings and teachings of the modern Theosophical Society.

Our next Sunday meeting.

We were founded 1914, and are the local branch of The Theosophical Society in England, (having its International headquarters at Adyar, India). We welcome all those who are serious in wishing to know the Ancient Wisdon as it is set out in the writings of Helena Blavatsky, her contemporaries, and those who are consistent with these original teachings. We run regular study groups and introductory meetings. Contact Torbay Lodge

See also the websites of:

Torbay Lodge runs regular meetings and various study groups. We welcome enquiries from those who are in sympathy with our aims, as above.

Past Sunday events include:


Article & Discussion on Human Evolution in The Secret Doctrine: To Atlantis and Beyond following the epic journey of humanity from the perspective of H.P. Blavatskys master work The Secret Doctrine. We trace the origins of consciousness, creative thought, will, imagination, separation of the sexes, birth and death, and much more.

Article & Discussion on Charles Johnston's account of A MEETING WITH H.P.B. Charles Johnston was an Irish writer, journalist, theosophist and Sanskrit scholar (link to Theosophy-Wiki) and his account concerning a conversation with H.P. Blavatsky contains a great many points of teaching.

Article & Discussion on THE BIRTH OF MIND From 'Man, The Measure of All Things', Sri Krishna Prem's highly readable commentary of volume 1 of 'The Secret Doctrine we look at the teachings telling of the origins of the human mind. It is part of our understanding of the development of Humanity's spirituality in our journey, over lifetimes, through the '49 fires'.

Article & Discussion on THE SECRET BOOK OF DZYAN In the libraries of the Tibetan Gelugpa Lamas are the books of Kiu-te, and the Book of Dzyan (on which H.P. Blavatsky's The Secret Doctrine is based) is a set of commentaries of this ancient knowledge; "The Secret Doctrine is based upon stanzas and verses from what Blavatsky called 'The Secret Book of Dzyan';'Book of Mystic Meditation' or 'Book of Wisdom attained by Meditation'." Dr Edi Bilimoria

Article & Discussion on THE FUTURE OCCULTIST (originally from THE THEOSOPHIST, Vol. V. No. 11, August, 1884)
On the elevation of woman the worlds redemption and salvation hinge. Looking forward to the developments of humanity should be of interest to us all.

Article & Discussion on THE QUEST FOR PERFECTION (from THE THEOSOPHICAL MOVEMENT magazine, March 2017 edition)
Looking at the human condition in contrast with the Greek ideal of finding beauty in proportion and symmetry. See: http://www.ultindia.org/tm_magazine/TMMarch2017.pdf

Article & Discussion on CULTURE OF CONCENTRATION (W. Q. Judge) - The Astral Body and the Development of the Permanent non-physical body.

Talk & Discussion: The Myth of Psyche & Eros and their meaning as to Transformation & the Spiritual Path(loosely based on a study group from the Theosophical Society Summer School 2017). Symbolises the journey of the soul, and the transformation of thoughts and feelings in the quest for consciousness.

Talk & Discussion: Contemplation - Damodar Mavalanker A wide ranging esoteric article covering, amongst other subjects, the Law of Attraction, the Life Atoms, and their meaning in terms of this and future lives.

The term "Theosophy" comes from the Greek theosophia, which is composed of two words: theos ("god," "gods," or "divine") and sophia ("wisdom").

Theosophia, therefore, may be translated as the "wisdom of the gods," "wisdom in things divine," or "divine wisdom." The word "theosophy" was first used in writing during the 3rd to the 6th century of our era by the Alexandrian Neo-Platonic philosophers. They used this term to denote an experiential knowledge that came through spiritual, not intellectual, means. In the course of time the word "theosophy" has been adopted to denote various significant teachers or spiritual movements. Among such, we can find Meister Eckhart in the 14th century, Jacob Boehme in the 17th century, and Emanuel Swedenborg in the 18th century, and others.

In the last quarter of the 19th century Helena Petrovna Blavatsky (1831–1891), Henry Steel Olcott (1832–1907), William Quan Judge(1851–1896), and a group of like-minded people, founded the Theosophical Society, thus bringing the term back into light again and creating the modern Theosophical Movement of which we are a part.

Introduction to the teachings of Theosophy 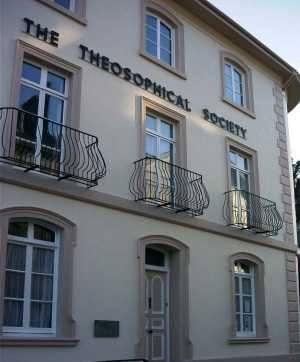 Torbay Lodge as a local branch of The Theosophical Society in England has a very specific aim. Our work is 'to study and disemminate Theosophy and serve as an active centre of Theosophical life' - with special emphasis on the body of writings and teachings of the modern Theosophical movement. The building was left in the 1920's to the Society in England with the intention of providing a venue in which like minded individuals may come together in their study of Theosophy. We warmly welcome those who actively sympathise with our aim and can offer membership of the Lodge alongside membership of the International Theosophical Society. Such members have the freedom to work, outside of the Lodge, on themes of particular individual interest and carry on activities which are to their liking, but the activity of the Lodge itself is necessarily exercised within the framework of the Lodge Aim and the Theosophical Society's own distinctive character and structure.

Our weekday study group is currently our shared study of Geoffrey Farthing's unique and detailed account of the after-death states and processes: When We Die Link to Book For further information please contact us (see top of page)

In 2014 we celebrated 100 years of Theosophy in Torbay. The Charter of Torbay Lodge was signed by Dr Annie Besant on 31st January 1914 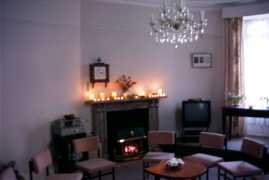 Torbay Lodge has its own building situated near Torquay harbour. We are very lucky at Torbay Lodge to have such a magnificent building. It was left to the English Theosophical Trust, in 1925 as a legacy, for the use of the Torbay Lodge, and we feel a sense of responsibility to the sentiments of that bequest both in terms of care of the building and its use in pursuance of the objects of the Society and fulfilment of the Lodge Aim (see above).

Torbay Lodge has a Library with a fine collection of esoteric literature, and various media resources and a study room are available to members.

To find us - Go up Torwood Street, away from clock tower at Torquay Harbour. In 200 yards - at traffic lights - turn right onto Parkhill Road. Almost immediately, the traffic flow is then onto Meadfoot Road - where there is a car park, but fork right for Parkhill Road itself and we are 100 yards on left.
Please note that apart from small limited stay parking (2 hours) area nearby, parking is restricted to residents only. Meadfoot Road car park is nearest public parking.